In beautiful high-country Colorado, the historic Prodigal Mine sits at an elevation of 8,600 feet in the Mummy Mountain Range. This impressive claim held a massive gold-and-silver-producing operation that left behind thousands of tons of gold-laden tailings. Not so long ago, the Prodigal property was the beloved home of many miners, who cherished every breath of the petrichor and pine-scented air this property afforded. Unfortunately, today, the Prodigal site looks incredibly different than it did twenty-one years ago due to reclamation. Once you reach the eastern flank of Prohibition Mountain, the claim is easily locatable, as it sticks out like a sore thumb amongst the evergreen backdrop of the mountain. This is to say, the Prodigal is primarily distinguishable by its senseless destruction.

In 2001, the Colorado Division of Minerals and Geology chose to waste taxpayer dollars on the “reclamation” of the Prodigal Mine. When Gold Rush Expeditions, Inc.® surveyors visited the Prodigal mine site in 2015, they could tell which agency had reclaimed this site by the metal marker, located in a sizeable sloughed-off hole read, “Colorado Divisions of Minerals and Geology. 2001.” For obvious reasons, federal agencies have not advertised the reclamation work they did on this site, as money was spent, but nothing was really “reclaimed.” Like a tornado, the unbridled contractors responsible for the legwork of the reclamation tore through the Prodigal claim, indiscriminately destroying the site’s manmade structures along with its natural features. As of 2015, the Prodigal Mine was a sorry sight. At first glance, you might have thought the lifeless property was the victim of a forest fire or an avalanche. A closer look revealed that the massive rotting trees strewn across the property were all purposely cut or pushed over with machinery. Fourteen years after the site’s reclamation, the area still looked like a garbage heap. At the Prodigal’s entrance, a locked metal gate was installed to obstruct the public’s access to the mine’s underground workings. These types of gates are almost always installed without any semblance of justification. The Bureau of Land Management and Forest Services’ uncontested position that underground access goes beyond casual use allows them to revoke the public’s access to mines on public lands with these locked gates. Although most miners oppose reclamation entirely, many can concede that these metal gates are one of the least invasive reclamation techniques. By installing these pricey gates, federal agencies can meet their goal of protecting themselves from extremely rare lawsuits over injuries on public lands without permanently destroying a site’s value or accessibility for miners. The installation of this type of metal gate was the only measure that needed to be taken to keep the public out of the Prodigal Mine. Still, Colorado’s Division of Minerals and Geology did not stop there. In a show of excessive force and poor decision-making, contractors pushed over healthy trees and piled the debris over the entrance to the mine. This was not just reckless and unnecessary but genuinely asinine. The decision to shroud the mine entrance with giant decomposing trees has made the Prodigal site more dangerous. The unnatural garbage pile simultaneously calls attention to the mine entrance and threatens to fall on any curious onlookers who approach the entrance. 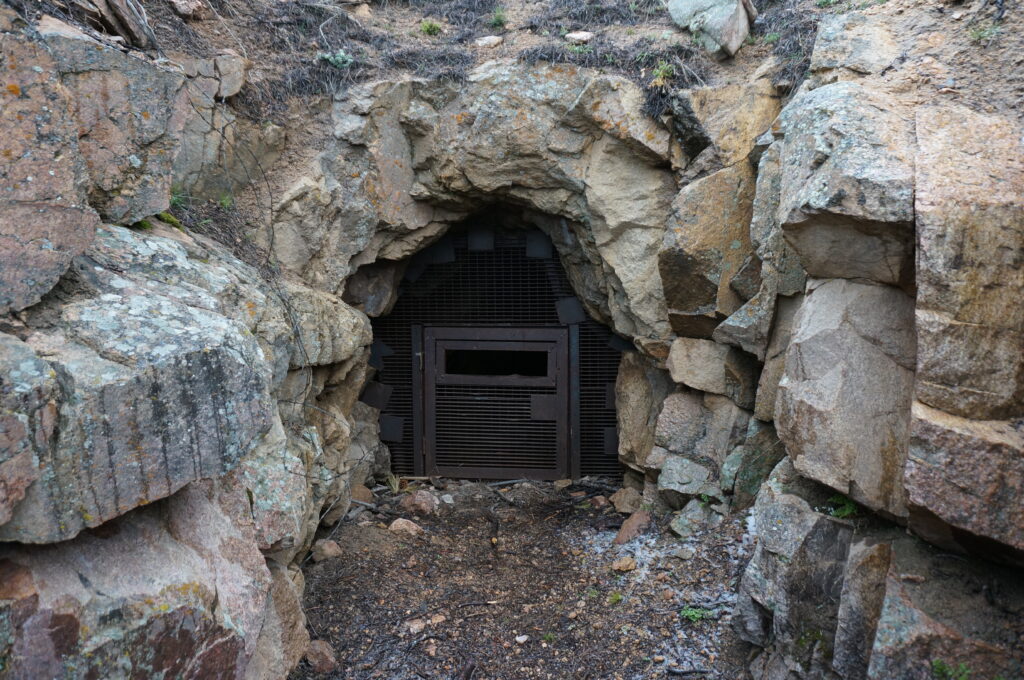 On the claim, Gold Rush Expeditions, Inc.® surveyors noticed a series of large sloughed-off holes, which were likely spots where reclamation contractors blew up supports with dynamite. This was a waste of time and resources, also not to mention dangerous! Like a group of adolescent boys, those in charge of the reclamation destroyed the workings of the Prodigal Mine for the sheer joy of seeing an explosion. These people were not mining engineers. Even for their own safety, they should have never tried collapsing any part of a mine.

The irony of the Colorado Division of Minerals and Geology’s strong anti-mining bias is not lost on us. As of 2015, the tailings at the Prodigal Mine were beautiful and obviously valuable. Gold Rush Expeditions, Inc. surveyors identified lots of visible gold in the piles. If it seems beyond counterproductive for an agency in charge of minerals and geology to suppress mining, that’s because it is. The agencies in charge of reclamation don’t have the authority to take away Americans’ right to mine public lands, but they get away with it all the time! Colorado is famous for its gold-rich ore. Instead of promoting resources, which would benefit citizens, these federal agencies destroy avenues of revenue. Many people in Colorado’s tiny mining towns could probably benefit enormously from new mining activity, yet sadly, those very people’s tax dollars are being spent to destroy mining.

One of the worst parts of the reclamation job at the Prodigal Mine is the blatant disrespect the Colorado Division of Minerals and Geology showed for the miners of a bygone era. Before reclamation, a historic miner’s cabin stood near the Prodigal Mine. During reclamation, contractors tossed tree limbs on the cabin and collapsed its structure. What remains of the cabin reveals that the cabin was special. The logs were carefully notched out with a knife or axe, which indicates it was built sometime between 1870 – 1900. A closer look at some of the logs reveals weathered names that miners once carved into the cabin walls. The reclaimed Prodigal Mine is a sad legacy to leave for the bygone miners of Colorado, who built the state on their backs. Looking at what the government is doing to America’s remaining mining properties can feel despairing, but not all hope is lost for the mines that the Forest Service and Bureau of Land Management have prodigally destroyed. It will be up to miners to fix these sites. Although it will take time and effort to improve sites like the Prodigal Mine, we hope to see a future where claimants can render the destruction of reclamation null and reap profit from historic sites again.